News of my latest publications, events, and episodes of the Losing the Plot podcast! It’s about a futuristic city in which, one day, everyone’s mother dies. The citizens mostly resort to android therapists to cope with their grief—but then scientists discover a potential way to bring back everyone who ever died. A cult enlists a lonely programmer to track down and stop this technology, because they fear it will bring about the end of the world.

This one I wrote on and off for 7-8 years. When I started writing, it was just so I could tell this story and then I didn’t think I’d have others.

So if you wanted to know where best to start with my writing—or really anything about me—this book contains about anything I ever figured out in 28/29 years, haha.

Ever forget to post anything on your blog for almost a whole year?

It doesn’t mean I’ve disappeared from the internet–but where did all my content go?!

Well, I wrote some blog pieces for Aphotic Realm which you can find here–and then I half-wrote a whole bunch more, thousands of words of them languishing in Google Docs somewhere, for me to maybe get around to one day…

And my podcast, Losing the Plot, has similarly migrated over to Aphotic Realm’s podcast network! Sorry I didn’t inform you of that on this blog, dear follower—but please do head on over to AP to catch up on the latest ‘sodes (ew, haha!)

As for my fiction–Urban Crime Short Stories from Flame Tree Publishing came out earlier this year, featuring my story “Mr Sleepy.”

Super exciting to have gotten work in such a prestigious anthology! I even found a copy in one of the mainstream bookshops here in Stavanger, leading me to believe the book is all over by now. I opened it, showed my name to the woman working there then left immediately (as one does. Sharing TOC joy with a strange? Yes. Sharing tears of joy? Not so much!)

I also have a story in Weirdpunk Books’ forthcoming anthology The New Flesh: A Literary Tribute to David Cronenberg. I’ve seen the full cover art for it and it’s absolutely wild! My story, “Lackers”, is about a secret sex club for maimed people, because of course it is. I interviewed fellow contributor Gwendolyn Kiste about this book recently, and plan to interview some of the other authors in future also 🙂

Finally, my novella/novel/memoir thing, “Greev“, will be out with NihilismRevised on 30th December looks like.

Does that mean I can finally tell you what it’s about?! I guess so.

It’s a sci fi story that takes place in the fictional city of Los, where one day everyone’s mother dies. Soon after, a pair of doctors stumble upon a technology that may bring back the dead–though a local cult is convinced this technology will bring about the end of the world…

I’m excited to see what people make of it. I initially started writing just so I could write this book, but along the way became enthused by the notion of telling so many other stories. Over the course of 7 years, I kept taking the new skills I obtained back to the writing of this book. How could I possibly say, after a time like that, whether it’s what I expected it to be? It half-is, half-became something else. But it’s as “what it’s supposed to be” as I can make it, and for that I’m glad 🙂

What’s next? Well, I seem to be halfway through writing two separate short story collections (which doesn’t tell you anything about when you might get to read them!) while also pouring a lot of energy into the Stavanger Filmmakers Club, a club I started in because, well, it didn’t exist already. And I started it on no greater authority than having seen the necessity for it. As is my right!

We have any number of ideas for the direction of how this thing will go. I already made a little short film so I could demonstrate to others what I was after. Here is “Can I quit my day job yet?”

What to say about the club? If you ever find yourself in Stavanger, hit us up! And wherever you are in the world, you have my permission to pursue anything you damn well please 🙂

Cheers for reading, sorry for not checking in earlier, and hope your year is going well enough!

Riya Anne Polcastro is an Oregon-based author whose books include Jane, Suicide in Tiny Increments, The Last Magdalene and the forthcoming Dentata.

We talk about austerity, privilege, murder photography and more!

(But, as I mention, I’m moving, so the podcast is going on hiatus for a bit—see you later this year :D)

Jenn Stroud Rossmann is a fiction writer and an engineer. Her first novel, The Place You’re Supposed to Laugh, is out now from 7.13 Books. She writes the essay series An Engineer Reads a Novel at Public Books.

We talk about the ways in which society perceives us, the challenge of pursuing two passions at the same time—and the Navier Stokes equations, of course!

Marshall, who provided Losing the Plot’s intro music, has a new EP out now! Check out “Emerald Shitty” here!
emeraldshitty714.bandcamp.com/releases

We talk about professionalism, the ethos of indie publishing, and friends made along the way 🙂

Matt Spencer is an author of weird and wonderful fiction, currently living in Vermont. He has work published in Broadswords & Blasters (whom we’ve heard from before on Losing the Plot!), his collection, Story Time with Crazy Uncle Matt: A Tangle of Yarns is now available, and he has a novel forthcoming next year.

We talk about sucky high school experiences, the new pulp movement and getting so high you adapt Shakespeare!

Sam Richard is an editor at Weirdpunk Books, whose latest book is “Zombie Punks Fuck Off”, co-released with CLASH Books. He is also an author with two forthcoming books, a memoir from CLASH Books and a collection of short stories with NihilismRevised.

We talk about writing, grief, and people who pretend to be characters in Cormac McCarthy novels!

When Your Publisher Closes

Renee Miller uses the occasion of Hindered Souls Press’ closing to share her wealth of experiences in the indie publishing world. Do check it out 🙂

Dangling on the Edge of Insanity

I received some sad and disappointing news this week. Hindered Souls Press, who published my novel, Eat the Rich, has closed. (You can still purchase their titles on Amazon. Click the photo for the links:)

I think I’m most disappointed that you all won’t get to read Leo X. Robertson’s Jesus of Scumburg just yet. It was supposed to be released by HSP on Christmas Day. I’m currently reading it and I know it’ll find a new home. You can click the cover to read the early reviews and you’ll see why I’m confident this can’t be the end for this particular book. 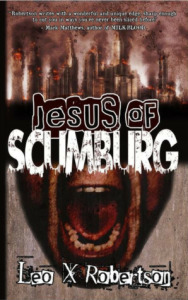 This isn’t the first time I’ve gone down this road, as regular readers of my blog know, and I doubt it’ll be the last. HSP doesn’t deserve any negativity, though. While there wasn’t much notice, there is no confusion about rights, and HSP is allowing its authors…

Renee Miller is a prolific indie horror author from Canada, and an undeniable inspiration to us all!

She has a slew of great material out with Unnerving, such as Church, Stranded and Cats Like Cream (now collected in the paperback Licking the Devil’s Horn) and she has a forthcoming short story collection, Flesh & Blood, out with Deadman’s Tome.

We talk about the trials and tribulations of the indie lit world, joining Scientology and Christmas ouija boards!